Super soft and juicy, Chicken Momos are simply irresistible, don’t you agree? Furthermore, a great snack to munch on throughout the year, here’s how to make Chicken momos recipe step by step at home.

If there is one dish, that I could munch on at any time of the day, I would say it will be MOMOS. A delicious Nepali or Tibetan snack which is filled with varieties of delicious veg and non veg fillings spiced with minimal herbs, is perfect to serve as a starter, snack or even as a side dish along with your Indo Chinese meals.

I fondly remember eating them on a street side stall and with just one bite of these hot steamed Momos, they have already become one of my favourite dishes. You will find a lot of variations of these steamed momos at almost all the Indo Chinese restaurants all over India.

What I love about this dish? You can experiment with the fillings and make them according to your taste and preference. And thus, I love to make them at home, especially during Monsoons and Winters! Today, I am sharing the recipe of Chicken Momos with you guys, as this momos is an all time favourite at home too.

Learn how to make Chicken Momos recipe, that will surely be a winner at your dining table and I am sure everyone at home, from your kids to adults will love this one. Here is the recipe of delicious Chicken Momos.

Momos are a little basket shaped snacks, where the outer layer is made with all purpose flour. This outer layer is filled with assorted non veg/veg fillings spiced with herbs and then pinched to make small baskets. These delicious momos are then steamed or fried and then served along with a spicy chutney.

Traditionally, these Momos are steamed, but with time, people have also preparing various versions of these Momos such as Deep Fried Momos, Grilled Momos and Tandoori Momos. In the Nepalese households, the fillings are either made with cabbage, pork or chicken and they are lightly spiced with minimal spices too.

But with its growing popularity, there are so many filling options made with chicken, seafood and vegetables which are spiced with various sauces and spices. You can even make the filling spicy, with your favourite sauce and spices.

Making Momos is an art! It’s not as easy as it looks and you definitely need some practise before you get it perfect. But all the effort is worth, when you get those perfect shaped momos on your dining table.

How to steam Momos without a steamer?

If you don’t own a steamer, don’t worry! You can even make them in a regular Kadai or a heavy bottomed pan. There are two ways you can steamed the momos without the steamer.

Just make three big and loose balls out of aluminium foil and place it in the vessel. Add a few inches of water and then place a ceramic plate on it. Add the momos and cover the vessel with a lid. Steam for about 15 to 20 minutes.

You can use a kadai to make the momos. Place three small glass bowls so that we can balance the steel strainer in the kadai. Now add a little water at the bottom, which would create the steam.

Grease the stainless steel strainer and place it on the glass bowls. Add the momos in the strainer and cover it the kadai with a lid. Let it steam for about 15 to 20 minutes. You can even use an Idli maker to steam your momos.

Can you freeze Chicken Momos?

Yes, you can freeze Chicken Momos, but I would recommend you to freeze the uncooked ones. Shape the momos and then place them on a tray with a little distance and freeze them for about an hour or until they becomes hard and nicely frozen.

Once done, take them out of the tray and add the frozen momos in ziplock freezer bags and store them for about 3 to 4 weeks.

What to serve with Chicken Momos?

Chicken Momos are usually served along with a Chinese Schezwan Sauce, Mustard Sauce or even with a Soy and Vinegar Dipping Sauce. They can even be enjoyed with Hoisin Sauce or in India, the humble Coriander Chutney.

Momos comes from the 14th century, which was quite popular with the Newar community initially. It is said that, they were earlier only prepared in the Kathmandu valley, but was later introduced to Tibet and China by a Nepalese princess, when she got married to a Tibetan king in the late fifteenth century.

It is also said that they become popular in Tibet and China, as many Newar traders and artists used to travel to these countries in regular basis.

How to make the best Chicken Momos at home?

The recipe of Chicken Momos is really simple for me! Why? Because, once dough and rolling, filling the momos is done then you just need 15 minutes to bring all the edges of this snack together. You can shape it according to your comfort.

We use all purpose flour to make the outer layer of momos. But, the star of this dish is the minced chicken filling in the middle. As this filling has red chillies, ginger garlic, pepper powder and soya sauce as well, even a small ball of it makes you eat momos like never before. Indeed, they turn out that fingerlicking!

Lastly, steaming the momos is not a rocket science at all. You can use a steamer for a the same or make them without steamer by using the above given methods. 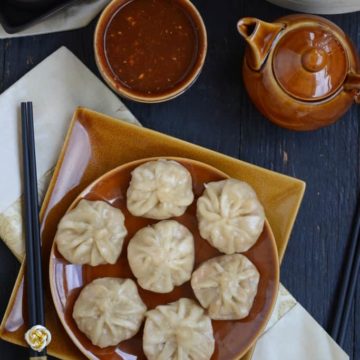