Pumpkin is popularly known as Kaddu in India. And trust me, we Indians use this vegetable in diverse ways. Though, we use it more while preparing Sambhar or sabzi, do you know that we can create so many different dishes using pumpkin?

Right from preparing a tangy accompaniment like Kaddu ka Raita or crafting a unique sabzi like Khatta Meetha Kaddu, pumpkin can be used more and more by us.

Considering that pumpkin combats cancer, improves the health of eyes, enhances immunity and fertility, it sounds right to eat pumpkin as often as possible. Now some of you, may or may not like the taste of pumpkin when cooked directly, but by making Kaddu Ka Halwa, you can easily solve that dilemma.

Handcrafted by sautéing dry fruits, grated pumpkin, sugar, and khoya, it has this awesome taste that lingers in your mouth for quite some time. With those oozing flavours of ghee, dry fruits, Kaddu Ka Halwa Recipe or Pumpkin Halwa revitalises your appetite in a beautiful way.

Kaddu Ka Halwa is simple to make and the fact that making a unique dessert takes time doesn’t really apply to Kaddu Ka Halwa. You can nicely serve Kaddu Ka Halwa Recipe | Pumpkin Halwa to your guests on Diwali or eat it with your family this festive season. Bring a huge kaddu home this weekend and prepare Kaddu Ka Halwa without fail: 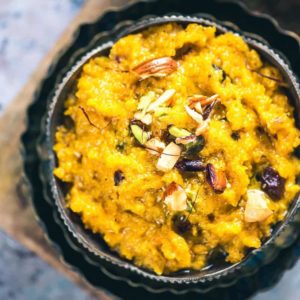