Sicilian Pizza or as traditionally called Sfincione, is a thick crust pizza topped with tomato, onion, breadcrumbs, and sometimes hard cheese. Here is how to make it.

Here you can try some more similar recipes, that you can enjoy for your weekend meals or prepare it for your parties – Bread Pizza, Mushroom Bell Pepper Pizzadilla, and Sausage Bread Rolls.

The authentic Sicilian Style Pizza originated in Palermo, Sicily, and is often called Sfincione, which means thick sponge. It is a sheet pan pizza where the crust is made directly in a sheet pan.

It has a spongy fluffy base smeared with a sauce made of tomatoes, onions, and herbs and is also topped with anchovies and hard cheese and is baked in a square baking tray.

A pizza’s crust can make or break a pizza. While ordering a pizza, one should wisely choose the crust. Depending on how you like the crust, you can choose between thin crust, regular, deep dish, and Sicilian crust.

Sicilian immigrants brought the Sicilian style pizza to the United States. The Detroit style pizza draws its lineage from it as well.

Traditional Sicilian Pizza doesn’t use mozzarella cheese because most of the milk used in Sicily comes from sheep and goat and not a cow.

However, york style; the version that’s sold in New York and other parts of the US have a topping of Mozzarella. This may be because when this Pizza came to the US, there was a generous supply of Mozzarella in this part of the world and it made it’s way on top of the Sicilian born pizza as well.

You will find Sicilian pizza or Sfincione in all the Italian bakeries or panificios.

Mostly a meatless version of this pizza is served on New Year’s Eve, Good Friday, December 7 (eve of the Feast of the Immaculate Conception), and Christmas Eve. In the warmer days, it is served at room temperature.

This Sicilian Pizza is,

Pizza Base: The base of the authentic Sicilian pizza is usually made of thick spongy dough, consisting of flour, water, yeast, and olive oil.

You mix all these ingredients and leave it for some time to rise and then press it into a rimmed baking sheet or a square-shaped baking pan brushed with some oil.

If you are not making the pizza immediately; you can also keep the dough in a plastic wrap for a couple of days in the refrigerator.

Try my multipurpose Pizza Dough which works great in this recipe as well.

Minced Garlic: I have used minced garlic as it gets flaky and crispy in the oven and adds a crunch to the pizza apart from the superbly delicious flavor.

Pizza Sauce: In the authentic Italian version, pizza sauce or tomato sauce is not used. Instead of crushed tomatoes are slathered along with other ingredients.

I had my homemade Pizza sauce ready and it was a great addition to this pizza, so I decided to use it. It is much more flavourful than just plain tomatoes.

These toppings are not traditional but taste great. You can even use red pepper or yellow pepper.

Traditionally, onion sautéed in oil is also topped on the Sicilian pizza but I have skipped it. You can definitely top your pizza with some.

Boiled Chicken: Traditionally it is topped with anchovies, but I have used boiled chicken. You can use any meat you like. You can also top it with pepperoni.

I have used a mix of parmesan and mozzarella cheese. You can just use mozzarella if you don’t have parmesan available.

Traditionally Mozzarella was not used to make this pizza, but the US version has it.

Breadcrumbs: Breadcrumbs are an important ingredient in this pizza. It makes the pizza crunchy and crispy.

Basil leaves: Basil leaves give a unique flavor to the pizza and is one of my favorite flavors.

How to make Sicilian Pizza?

Add all the ingredients in the bowl of the stand mixer.

Knead the dough on medium speed for 3-4 minutes.

Cover the bowl with a kitchen towel and keep in a warm place for 2 hours or until the dough doubles in size.

Brush a 9×13 inch rimmed baking sheet with olive oil. Transfer the pizza dough on to it. Stretch the dough to fill the pan.

Drizzle olive oil mixed with minced garlic all over the dough and brush it all over.

Cover the baking sheet and keep it aside for 30 minutes.

Remove the cover and top the dough with pizza sauce.

Bake for 12-15 minutes until the crust is golden brown. Remove the tray from the oven. Garnish with fresh basil leaves. Cut into slices and serve hot.

What is the difference between Sicilian and Normal Pizza?

A normal pizza is typically round, whereas a Sicilian styled is rectangular.
The crust is thick and spongy unlike a normal pizza, where the crust is dense and thin.

The dough uses more oil than the regular pizza. The crust is heavy and fluffy, and its bottom is crispy because the pan is first seasoned with oil. It’s more like a focaccia.

Also, the Sicilian Style has a lot more tomato sauce than other Pizzas, which can also overtake the Cheese sometimes.

There is a very slight and subtle difference between these two types of pizza.
Neapolitan pizza is always baked in a wood-fired dome-shaped oven. The dough is hand-kneaded into a thin round.

The crust is slightly thinner than Sicilian. Whereas Sicilian style pizza is rectangular and the crust is thick and spongy. It uses more oil and is heavy and fluffy. The crust from below is almost fried due to the oil brushed on the pan.

While Sicilian Pizza has a denser and thicker crust nearing to the Focaccia, Grandma Pizza’s crust is thinner and has a strong flavor from the garlic. Also, Sicilian Pizza is a bit sweeter because of the use of lots of tomato sauce.

Is it Same as Deep Dish Pizza?

No Sicilian and deep-dish pizza is different. A deep dish is also known as Chicago-style pizza.
It is almost like a pie, but not really a pie. It is baked in a deep-dish pan this is oiled generously to get a crispy crust.
The slices can be 2-inch thick. The dough is usually made of cornmeal, semolina, and food color to get a yellow-colored crust. It has a unique texture.

If you are looking for gluten-free and vegan versions, I have covered you for the same too. To prepare the dough, you can use Gluten-Free Bread Flour instead of All-Purpose Flour.

You can skip adding the Cheese as much traditional Sicilian Pizza is prepared without the same. It’s just the US version, which uses Mozzarella on top.

Skip adding chicken, and use veggies such as aubergines, bell peppers, onions and corn.

Sicilian Pizza Dough will for last in the refrigerator for about 1 week. While storing, tightly cover it in its bowl with plastic wrap so that the surface doesn’t dry out.

You can also freeze it in the same manner for up to 3 weeks. 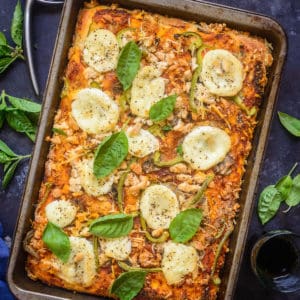 For the pizza dough

Traditional Sicilian thick crust pizza doesn’t use mozzarella cheese but the US version has it. You can go ahead and top it with pepperoni, mushroom, onion slices or any other topping of your choice. Just don’t call it traditional then 🙂