Tabouli Salad (Tabbouleh) is one of the most popular Middle Eastern Salads. Made using fresh parsley and bulgar wheat as the star ingredients, this salad is light, refreshing, and super healthy.

Tabouli Salad is very easy to make and uses very few simple ingredients. Once the prep is done, it comes together in just 5 minutes.

It is also great for meal prep. Parsley holds well against the citrus dressing and the texture of this salad doesn’t change for 3-4 days in the refrigerator.

The recipe that I am sharing today is a traditional Tabbouleh Salad recipe that I learned from a chef of a very popular Middle Eastern restaurant in Bangalore.

Serve it as a side for a Middle Eastern-style meal or for a light dinner. It is also a great salad to take for potlucks, get-togethers, or BBQ parties.

What Is Bulgar Wheat

Bulgar is cracked wheat that has been parboiled or partially cooked. It is a popular ingredient in Middle Eastern and Mediterranean cuisine. It is a minimally processed grain and has an earthy nutty flavor.

Like any other whole grain, bulgar also has many health benefits. It is rich in vitamins and minerals and low in calories. It promotes heart health and controls blood sugar levels. Bulgar is also a rich source of fiber.

When cooked, bulgar has a texture similar to quinoa, couscous, or steamed rice.

I personally like to use fine bulgar to make this salad as it gives a nice texture to it.

This grain is very forgiving and can be cooked in advance and refrigerated.

To cook bulgar, all you have to do is soak it in boiling hot water or stock. The time of soaking depends on the texture of the grains. Fine bulgar gets cooked in just 10-12 minutes, the medium-grain will take 15-20 minutes and the coarse grain will take 25-45 minutes to cook perfectly.

Bulgar Wheat – I have used fine bulgar to make this recipe and it needs about 10-12 minutes of soaking time. It has a nice bite to it and goes well with the rest of the ingredients.

Broth – Use vegetable or chicken broth to cook the bulgar. You can use water too but the flavors will be compromised.

Herbs – Fresh parsley is one of the main ingredients in this salad. You can either go for flat parsley or curly parsley. I feel that the curly one gives this salad a little more volume. Other than parsley, I have also used mint leaves and spring onion greens. Together they make this salad very refreshing!

Some people add red onions instead of green onions for a better crunch in the salad.

Veggies – Chopped tomatoes and cucumbers are traditionally added to this salad. They give a nice crunch to it.

I prefer using English cucumbers, as they are thin-skinned and seedless. Use fresh, firm, and ripe tomatoes!

Use good quality olive oil for the dressing, as it really makes a difference when it comes to its taste.

Feta and Olives – Finally, top the salad with some crumbled feta cheese and pitted and sliced olives. Use kalamata olives or black olives.

The Feta Cheese adds a soft texture to the salad complimenting the nice fresh bite of the veggies.

How To Make Traditional Tabouli Salad

Bring ½ cup chicken or vegetable broth to a boil over high heat.

Remove the pan from the heat and stir in ½ cup fine bulgar.

Cover the pan with a lid and keep aside for 10-12 minutes.

Remove the lid and fluff the cooked bulgar using a fork.

Transfer the cooked bulgar to a mixing bowl.

Refrigerate the salad for 30 minutes.

Toss The Salad With The Dressing

How to make gluten-free tabouli?

How to make vegan tabouli salad?

You can make it vegan by replacing the chicken broth with vegetable broth and skipping adding feta cheese.

Which vegetables can be added to the tabouli salad?

Traditionally, only cucumber, tomatoes, fresh herbs, and green onions are added, but if you like to experiment you can go ahead and add in colored bell peppers, broccoli, zucchini, etc.

Can we use a food processor to chop the veggies?

You can use a food processor to finely chop the parsley. For veggies, I will recommend using a sharp knife to chop them.

Yes, this salad is low in carbs and is packed with the healthiest of ingredients. Bulgar is one of the ingredients that are very rich in fiber which is great for digestion. Other than bulgar, fresh parsley is a wonderful anti-inflammatory ingredient that reduces the risk of cancers and improves your immune system, whereas tomatoes and lemon juice are loaded with vitamins and minerals.

Can you make tabbouleh ahead of time?

If you ask me, I will say that this salad actually tastes better the next day when all the flavors come together. Tabouli salad will last in the fridge for about 3 to 4 days. Store it in an air-tight container and refrigerate. This salad is not freezer-friendly though.

This salad tastes the best when served cold. Once ready, keep the bowl in the refrigerator and let it chill for at least 30 minutes.

The best way to serve this Lebanese salad is chilled on a mezze. It tastes fabulous with hummus, baba ganosh, falafel, and baked pita bread or pita bread chips.

You can serve this salad on its own too as it’s quite filling.

It is also a great dish to be served on the side with Lebanese-style grilled chicken or fish for a healthy and filling dinner.

You can add tabouli in romaine lettuce leaves and serve it as a healthy boat.

Serve it on the side with grilled kebabs, mujaddara, shawarma, Turkish fried eggplant, middles eastern potatoes, or dukkah with bread and oil. 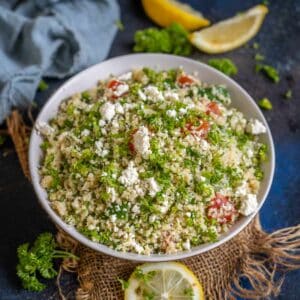 To Cook The Bulgar

Toss The Salad With The Dressing

This salad tastes the best when served cold.