Panchamrut (Charnamrut) is a traditional ayurvedic concoction made for Hindu poojas and religious rituals. It is made using 5 ingredients (Paanch Amrut) and is considered holy and sacred. Here is how to make it.

I mostly make it along with Sooji Halwa and Panjiri for prasad (offering to god).

Panchamrut, also called Charnamrut is a beverage made especially for Hindu poojas and religious rituals. It is a Sanskrit word where Panch’ means ‘Five’ and ‘Amrit’ means ‘The Nectar Of Gods’.

Panchamrit is made using 5 main ingredients which when combined in the right quantity enhance the quality of each other.

This beverage is considered holy and sacred and is used for all Hindu poojas, especially for the Abhishek of Hindu gods. After the pooja commences, it is distributed among all the people attending as prasad.

Panchamrut has many health benefits and it nurtures and heals the body and increases immunity. It helps in the growth of the brain and helps in physical growth.

It nourishes the skin and keeps hair healthy and black. Panchamrut aids a smoother pregnancy as well. It is also said to aid sexual potency.

This recipe can be easily doubled or tripled as per your requirement. Make sure to stick to the proportions.

Note – I see many recipes floating around with sugar as one of the 5 essential ingredients of panchamrut. But sugar was never a part of it. Humans learned to make sugar much later than the Panchmrut recipe.

It is believed that the gods attained immortality after drinking Panchamrut. Therefore, each ingredient used in it is special and has its own significance.

The ingredients are mixed and served in a silver or a bronze vessel as these metals are also considered good for health.

Milk – It symbolizes purity. Cow’s milk is used to make it. Do not boil the milk for making panchamrut.

Honey – It grants a sweet and kind speech.

Ghee – It marks knowledge. Use ghee made using cow’s milk.

Apart from these must-have ingredients, nuts are also added to it for a nice texture. I have added almonds, cashew nuts, chironji, but you can add any nut that you like. I also add raisins and shredded dry coconut to my charnamrut.

Ganga jal is added to it to purify it. You will get a bottle of Ganga jal at any Indian grocery or pooja store.

In South India, people add chopped ripe bananas and chopped fresh coconut to their recipes. In Kerala, some households add tender coconut water to this prasad, which is also called Panchakavya.

Tip – I used a glass bowl but a silver or a bronze bowl is a better choice.

Refrigerate for 1-2 hours before serving. Pour in small bowls or glasses and serve.

What is Panchamrit Abhishek?

Panchamrut Abhishek is a Hindu ritual where the god idols are bathed with panchamrut. It is performed at temples and at homes. Mantras are chanted throughout the process and once the pooja commences, the charnamrut is distributed as prasad.

Is Panchamrut good for pregnant women?

It is said that Panchamrut helps in the growth of the unborn baby. It boosts muscle strength, brightens up the mother’s brain, and also helps in increasing immunity. It also ensures the formation of breast milk in women.

What can be added instead of honey?

Though honey is added traditionally you can also go for sugar or jaggery for a variation. 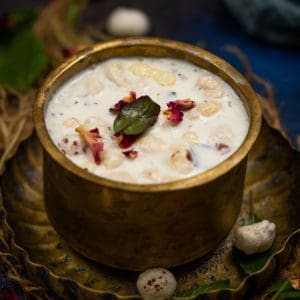 Do not keep the panchamrut for more than a day since it is made using raw (not boiled) milk. This recipe can be easily doubled or tripled as per your requirement. Make sure to stick to the proportions. In South India, people add chopped ripe bananas and chopped fresh coconut to their recipes. In Kerala, some households add tender coconut water to this prasad, which is also called Panchakavya.