Want to make a restaurant like Naan Bread at home? Then look no further. This recipe makes the best one ever. Make them on a stovetop on a tawa or use an oven, they will turn up equally delicious.

Naan is a soft, fermented Indian flatbread that is made with all-purpose flour, which is its key ingredient. This is No Yeast Bread, which can be easily made at home.

It is a popular Bread, that you will always find on the menu of North Indian restaurants or even during weddings.

Usually, we eat it in restaurants and avoid it making it at home, thinking that it is difficult to make. But with this recipe, you will see that it is so easy and can be made even for your everyday meals using only a basic stovetop and a griddle (Tava).

Traditionally, this Restaurant Style Naan is made in Tandoor, but here we will prepare it on Tawa or oven making it easy to make at home.

This Homemade Bread is,

This Indian Bread, uses ingredients such as,

All-Purpose Flour – Traditionally, Naan is just made with all-purpose flour, but you can also add in whole wheat flour for a healthy alternative. But the texture will be a bit different.

Baking soda & Baking powder – This helps in the rising of the dough.

Kalonji or Onion Seeds – This is optional, but do add them, it gives a nice flavor to your Naan.

You can also use in white sesame seeds, if you do not have kalonji seeds.

Yogurt and Milk – The dough is kneaded in yogurt and milk, which makes the Naan super soft.

Other Ingredients – Other than this, you will just need salt and sugar.

Oil a bowl and transfer the dough in the oiled bowl.

Cover the bowl and keep in a warm place for 5-6 hours.

Make small balls of the dough.

Dust and roll the dough over the kalaungi seeds to make thin circle or oval.

Apply water on the top surface of the oval.

Heat a griddle. Keep the naan on the griddle with kalaunji side up. It will stick to the griddle because of water applied.

Now turn the griddle upside down over the flame.

Cook till brown spots appear on the surface. Turn the griddle and cook for 20-30 seconds.

Both the bread, Naan and Pita Bread is made of all-purpose flour, but other ingredients differentiate from each other.

Also, Naan, is an Indian bread, whereas Pita Bread is used in Middle Eastern and Mediterranean cuisine.

How to make it in Oven?

While I find it easy to make Naan on the stove, you can make it in the oven too. Firstly, preheat oven to 500 F degrees.

Arrange them on a baking tray and then bake for 4-5 minutes or until it turns golden brown from both the sides.

Remove from the oven, apply the butter, and serve hot. If you want a charred texture, you can place the naan in the oven under the broiler.

How to make it with yeast?

If you are adding yeast, you can avoid adding Baking Soda in this recipe. Mix the active yeast with water and let it sit for about 5 minutes. Add the mixture into the dough while kneading.

For a healthier alternative, you can make it with whole wheat flour instead of all-purpose flour.

Is this recipe Vegan?

No, this recipe uses yogurt and milk, making it Non-Vegan. To make it vegan, you can use dairy-free yogurt and warm water to knead the dough.

The benefit of making naan at home is that after preparing the dough you can transform it into any type of naan that you wish to make.

Following are some of the variety of naan that you can prepare after fermenting the dough:-

Garlic – Add some finely chopped garlic instead of kalaunii while rolling the naan. I make this version very often, as I love the flavor that garlic adds to this simple bread. Check the detailed recipe here.

Mint or Coriander – Replace kalaunji with chopped mint or coriander. You can add garlic with these herbs too.

Pesto – If you want to give it a little Continental twist, then add little pesto, seal the naan and then roll it again. Brush it with melted butter and one you take a bite, you will get that beautiful flavor of Pesto. So we can call it an Italian Naan, maybe?

Butter – To prepare butter garlic naan, cook it in the same way as mentioned below. After that brush up some butter on its surface and your delicious butter naan will be ready to serve.

Aloo – To make aloo naan prepare a spicy boiled potato masala and fill it in the dough ball in the same way as you do to prepare an aloo paratha. Cook it in a similar manner as specified below and aloo naan will be ready.

Paneer – You can prepare some melt in mouth paneer naan in the same way as you would make an aloo naan. Just replace aloo masala with a spicy paneer filling and you are good to go.

Cheese – Prepare cheese naan in the same way as you would make an aloo naan. Just replace aloo masala with some grated mozzarella cheese and your cheesy naan will be all done and ready.

Herb – Top the naan with chopped cilantro or mint along with garlic to make herbed garlic naan.

In order to make the naan look more attractive, you can always top the dough balls with some black sesame seeds, finely chopped coriander and mint leaves as well.

My favourite way to serve Naan is along with creamy and delicious Dal Makhani or Butter Chicken and thinly sliced onions.

You can try both Restaurant Style Dal Makhani and Jain Dal Makhani, they taste delicious.

Freezing Rolled Naan – Once the dough has risen, divide it into equal parts and roll them. Once done, place a parchment paper in between each Naan and stack them. Place it in a freezer bag, squeeze out as much air as possible and freeze.

Freezing the Dough – You can even freeze the dough. Freeze it a freezer-safe sealed container. Thaw the dough completely at room temperature and make the Naans.

I will recommend freezing it for not more than 4-5 weeks, as this recipe uses yogurt and milk.

Freezing Cooked Naan – Cook the naan and cool them well. Now freeze them in a ziplock bag. When ready to serve, thaw until softened. Then place in the heated oven until nicely warmed and crisp. You can even heat them over direct flame. 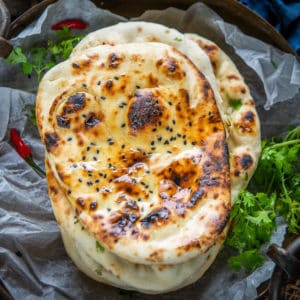 Want to make restaurant like Naan Bread at home? Then look no further. This recipe makes the best one ever. Make them on a stove top on a tawa or use an oven, they will turn up equally delicious.
4.25 from 4 votes
Print Pin Rate
Course: Bread
Cuisine: Indian
Prep Time: 10 minutes
Cook Time: 30 minutes
Total Time: 40 minutes
Servings: 6 people
Calories: 339kcal
Author: Neha Mathur