Paneer Korma is a Mughlai Style Paneer dish where paneer cubes are cooked in a rich onion based gravy. This Indian curry is rich and creamy and goes well with Indian bread. Here is how to make Paneer Shahi Korma recipe.

If you are Non Vegetarian, do try my Egg Korma and Mutton Korma Recipes.

What is Paneer Korma?

Mughlai Paneer Korma is a super-rich and luscious curry, where Paneer cubes are added in a gravy that has goodness of dry fruits and a creamy texture from yogurt, giving it a royal touch. Kewra water and saffron adds to the royal taste of the curry, and thus this curry has ‘Shahi’ in its name itself.

Whenever I have guests coming in for dinner for special occasions and festivals, this Paneer Shahi Korma is one of my favorite Paneer Curries to include on the menu. This one takes a little effort to make, but when the result is so good I don’t mind the extra few minutes I need to spend in the kitchen.

And when I see that “WOW” expression on the face of my friends and family, all the effort turns out to be fruitful.

Sometimes, to make it even richer I also add blanched almonds along with cashew nuts and yogurt. While the texture of this curry is just fantastic, this curry gets its delicious flavor from a special dry masala which uses ingredients like cloves, cinnamon, black peppercorns, green cardamom, black cardamom, cashew nuts, and browned onions.

In the end, Paneer cubes are pan-fried with a little oil and added into this curry. Crisp from outside and soft from inside Paneer cubes goes really well with this Mughlai Curry.

You can also add more vegetables such as Gajar, Matar, Aloo, Baby Corn along with Paneer in this curry and called it a Mix Vegetable Korma.

In case you are making a festive meal as Diwali is just around the corner, do not forget to include this mouth-watering Mughlai Curry in your meals, and we are sure that your friends and family will love every bite of it.

This Paneer Shahi Korma is,

Paneer – You can either use homemade Paneer or use the store-bought one. If using store-bought paneer, you can soak the Paneer cubes in warm water for about 4 to 5 minutes, to make it soft.

You can prepare the browned onions beforehand and store so that it comes in handy while preparing this Shahi masala. You can find the recipe here – Fried Onions.

Oil/Ghee – I have used both oil and ghee, but you can use either of them to make this curry.

Yogurt – Yogurt adds a nice creamy texture in the curry. Before adding yogurt, taste the same and see if it’s not sour. If it is sour it will ruin the taste of the curry too.

Spice Powders – We will add some basic spice powders such as coriander powder, red chili powder, turmeric powder, cumin powder, and salt. You can adjust the amount of spices according to your taste.

Saffron – Saffron is mixed with water and then added to curry, to add taste and rich flavor.

Kewra Water – To add some more royal flavor in the curry, we will also add in kewra water. You can easily find kewra water in your nearby Indian grocery store.

Coriander Leaves – Finally, finish off the curry by garnishing it with some freshly chopped coriander leaves.

How to make Paneer Korma?

Roast all the whole spices and cashew nuts until they turn slightly browned and fragrant.

Add them in a blender along with fried onion and add ¼ cup water to make a smooth paste.

Heat oil and ghee in a pan.

Add panner cubes and fry until they are browned. Remove the cubes from the pan and keep aside.

Add the masala paste and ginger garlic green chili paste in the same pan and fry for 3-4 minutes on medium heat.

Add the fried paneer cubes and mix well. Now add some water if the curry is too thick and cook for some more time. Garnish with fresh coriander and serve hot.

What is the difference between Shahi Paneer and Paneer Korma?

While Paneer Korma uses yogurt and cashews as its base for the gravy, Shahi Paneer uses tomatoes as the base of its gravy, making it a little sweeter.

Also, Paneer Korma is white or yellow in color, while Shahi Paneer has a red/orange hint to it. Check my restaurant Shahi Paneer Recipe.

How to make it vegan?

This Mughlai Paneer Korma will last in the fridge for a day or two when stored in an airtight container. Reheat it in a pan or in the microwave before serving, until it is nice and warm.

I will not recommend freezing it as it as yogurt in the gravy which might split when re heating the curry.

This curry is very versatile and can be served with any Indian bread such as Chapati, Tawa Paratha, Lachha Paratha, Puri, Naan, Tandoori Roti, etc.

You can also serve it along with Pulao preparations such as Matar Pulao, Vegetable Pulao, Kashmiri Pulao, or any other Pulao of your choice.

But if you are looking to make a festive meal, pair this delicious Paneer Korma along with Dal Makhani, Boondi Raita, Matar Pulao, Phulka, and Salad.

End the meal with an Indian Mithai or Halwa of your choice, because what is a festive meal without a sweet, right? 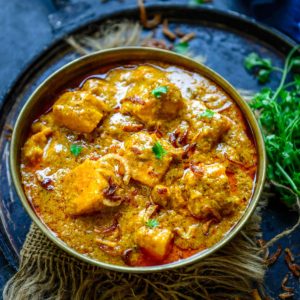 To roast and grind to a paste

You can also add some soaked poppy seeds in the onion paste while grinding. Mixing little maida in yogurt avoids it’s splitting. To make it creamier, add some fresh cream at the end of cooking.