Made using 5 whole spices, Panch Phoran or Panch Phoron is a traditional spice mix that is quintessential in Bengali cuisine. It is very easy to make at home using five basic Indian spices. Here is how to make it.

Panch Phoran is a whole spice blend, consisting of cumin seeds, nigella seeds, fennel seeds, mustard seeds, and fenugreek seeds, which originated from the Indian subcontinent and is widely used in the cuisine of Eastern India.

Panch means ‘Five’ and Phoran mean ‘Tempering’. So essentially, Panch Phoron is a mixture of five spices and is used for tempering various dishes.

A combination of spices that is popularly used in many everyday Bengali recipes. Unlike garam masala which is in ground form, Panch Phoran Masala is simply a mixture of the seeds of different spices.

This Indian five-spice is readily available in your nearby grocery stores but you can very easily prepare it at home as well.

It is widely used in the cuisine of Bangladesh, Eastern India, and Southern Nepal as well.

It is called by different names in different regions, for example, it is known as Padkaune Masala in Nepal, pas phoron in Assam, and & panchu phutana in Orissa.

In Indian cuisine, we add whole spices just after the oil heats up and then add the vegetables to prepare a nice curry, but you can also crackle this masala in some hot oil and use this as a tempering to top it all over some salads, salsa or yogurt dips as well.

This spice mix is,

Traditionally, Radhuni is used instead of Cumin Seeds, but it is not easily available, you can use cumin seeds instead.

A lot of people use equal amounts of all the spices in their mix, but I feel that fenugreek, radhuni, and kalonji taste bitter when used in large amounts.

Hence, my blend uses a lesser amount of these spices.

Mix all the ingredients in a bowl.

Store in a cool dry place and use it as required.

“Radhuni, known as ajmod in Hindi, is the dried fruit of Trachyspermum Roxburgianum. Grown mostly in South Asia, Southeast Asia, and Indonesia, it is often confused with ajwain.

Mostly used in Bengali cuisine, Radhuni is a strong spice with a smell similar to parsley and tastes like celery. It is also part of the local Panch Phoran mixture which includes cumin seed, fenugreek seed, fennel seed, and kalonji.” – Source

Radhuni is used for Panch Phoron in Bengal in place of cumin seeds. If we go towards Western India, Radhuni is hard to find, so people there use cumin seeds or celery seeds in place of Radhuni.

Panch Phoron is an integral part of any Bengali style tarkari. Be it Aloo, Cauliflower, parwal, or any gourd, it’s used in the recipe.

Panch Phoron tomato chutney and yellow dal with a tempering of this spice mix are to die for.

Just add a spoon of this masala in hot mustard oil or ghee and let them fry until the seeds start crackling. This technique of tempering spices in oil is called tadka in Hindi. The spluttering of these spices in hot oil releases a very strong aroma.

Do not fry these spices for too long as they have a tendency to get burn really fast.

Also, the fenugreek seeds tend to cook a little faster than the other spices, so keep your next step ready as soon as you add the spices into the oil, so that, you can easily bring down the temperature of the oil and spices do not end up burning.

You can store it in an airtight container or in a tight zip-lock bag and keep it in the refrigerator so that the spices remain flavourful and aromatic for a long period of time.

Even if you do not keep it in a refrigerator, always store it in a cool and dry place which is away from the heat of the gas stove and microwave or any other heat-generating appliance. 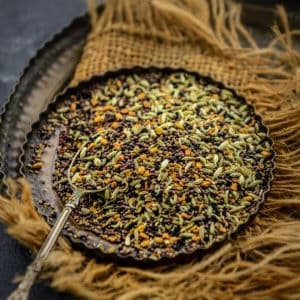 You can store it in an airtight container or in a tight zip-lock bag and keep it in the refrigerator so that the spices remain flavourful and aromatic for a long period of time. Even if you do not keep it in a refrigerator, always store it in a cool and dry place which is away from the heat of the gas stove and microwave or any other heat-generating appliance.