A fine mix of roasted spices like black peppercorn, star anise, nutmeg and more, Kerala Garam Masala changes your ordinary curry or dal in a whiff!. Use it in Kerala Style recipes or the regular recipes. Here is how to make it.

Every Indian household has its special box of spices and masalas which makes food as much ambrosial as possible.

I grew up being around those masalas in my mom’s and nani’s kitchen.

I always love that masala dabba, where they stored their favorite spices that were used in everyday cooking.

It was such a sight to see a pinch of masala changing the taste, texture, and color of a dish that initially looked ordinary.

My mom fondly used to tell me that “Masalas are magical, indeed!” and I have believed in the same with curious eyes.

Right from Tikka Masala Powder, Garam Masala to Chaat Masala, I have formed this habit of making various powdered masala recipes at home itself.

As you handpick various ingredients and spices to make masala, every of these masala powders cooks such a signature dish curry or dish that you feel spellbinding.

And one masala which has been a part of our everyday meals is Garam Masala.

But even this Garam Masala, has a lot of variations depending upon the region or even the households. So today, I will show you how it is prepared in the Kerala households.

Kerala Garam Masala is one such garam masala powder that is immensely used in Kerala recipes and it is known to have quite a fantastic taste.

No Malabar recipe is complete without a pinch of homemade Garam Masala sprinkled over it.

So, if you are also trying your hands on Kerala cuisine, don’t forget to make and store this Garam Masala beforehand, so that it comes handy whenever you need it.

Here are some more spices, that you can make at home and store for later use – Dabeli Masala, Homemade Chai Masala, Sandwich Masala, Achari Masala, Thandai Masala Powder and Sambar Powder.

Made by a mix of peppily roasted fennel seeds, cloves, black peppercorn, cinnamon, nutmeg, star anise, green cardamom, a pinch of this Garam Masala is enough to transport you to the seventh heaven with its flavors.

Also, because of the fact that is so easy to make and store, I have lost my heart from buying those readymade bland masalas now!

Go ahead and mark its recipe!

Very basic whole spices are required to make this Garam Masala. Make sure they are of the best quality.

Buy the spices from a trusted seller.

Sometimes the oils have been extracted from the spices and the poor quality stuff is sold in markets.

You can store it in an airtight container at room temperature for about a month,

Dry roast all the ingredients on low heat until they are slightly browned and fragrant.

Remove the pan from heat and let them cool.

Add them in a grinder and grind to make a fine powder. Store the garam masala in an airtight container for up to a month. 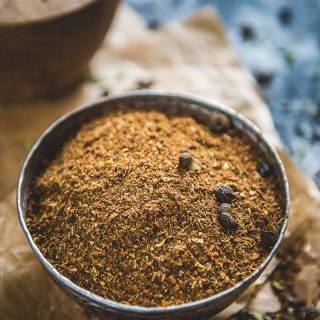 Always roast the ingredients on low heat for best flavours.