Make this healthy Banana Cinnamon Smoothie to start your day. It is loaded with flavors from banana and cinnamon. Here is how to make it (gluten-free).

Banana Cinnamon Smoothie is a delicious and healthy way to start your day. This smoothie is made with fresh bananas, Medjool dates, almond milk, yogurt, and cinnamon.

It’s a great source of protein and fiber, and it’s also low in calories. It is perfect to serve for a quick breakfast or as an afternoon snack.

You can easily double or triple the recipe and meal prep it for the week.

Banana – Use ripe bananas to make the smoothie.

Bananas are a good source of dietary potassium, vitamin C, dietary fiber, and vitamin B6. They also contain small amounts of magnesium, manganese, copper, iron, zinc, and various phytonutrients. Ripe banana have more sugar than an unripe banana, but they also have a lower glycemic index (GI) value, which means that they don’t cause spikes in blood sugar levels.

Make sure to freeze the bananas for a few hours to make a creamy smoothie.

Medjool Dates – Dates are loaded with nutrients and give natural sweetness to the smoothie.

Cinnamon – Cinnamon is a good source of manganese, iron, and calcium. It also contains small amounts of zinc, magnesium, and phosphorus. Cinnamon has been shown to have numerous health benefits, including reducing inflammation, improving insulin sensitivity, and lowering blood sugar levels.

Others – You will also need vanilla extract, Greek yogurt, and milk.

I used whole milk but feel free to use any milk of your choice.

How To Make Banana Cinnamon Smoothie

Tip – If the frozen bananas are too hard, then thaw them for 10 minutes.

Pour the smoothie into 2 serving glasses and garnish with ground cinnamon. Serve immediately.

How to make a vegan banana and cinnamon smoothie?

What else can be added to the cinnamon banana smoothie recipe?

1. Nut butter like almond butter, peanut butter, cashew butter, etc.
2. Add some protein powder. It will be great as a pre or post-workout snack.
3. You can add seeds like chia seeds, hemp seeds, flax seeds, etc.

This banana and cinnamon smoothie can be stored in the fridge for up to 24 hours. However, it’s best to drink it immediately after it’s made.

If you need to store it, pour it into a glass jar or container with a lid and keep it in the fridge. Stir well before serving. 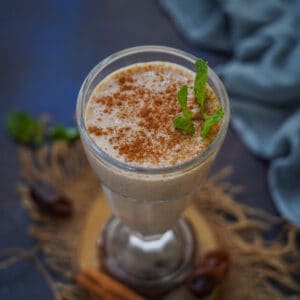 If you have forgotten to freeze the bananas, then add some ice cubes while blending. You can easily double or triple the recipe and meal prep it for the week.