Vangyache Kaap (Maharashtrian Pan Fried Crispy Eggplants) is a traditional Maharashtrian dish prepared with large purple eggplants (brinjals). Serve it with Varan Bhaat or Khichdi. (vegan, can be made gluten-free)

Brinjal is sliced into thick roundels, coated with spicy masala, semolina rice flour mixture and then pan-fried until golden brown and crispy.

It is quite popular in Maharashtrian homes and is served with Varan Bhaat (dal rice) or Khichdi for a comforting weekday meal.

Eggplant (Brinjal) – Use the large purple eggplant that we use to make bharta. Choose a medium-sized eggplant that is firm to touch and is deep purple in colour.

For The Masala Paste

Adjust the green chillies to suit your tastebuds.

To make the outer layer crispy, you will use a mixture of fine sooji(semolina), rice flour, salt, Kashmiri red chilli powder and turmeric powder.

To make it gluten-free, avoid using sooji and make it only with rice flour.

After slicing the brinjals, soak them in salted water as they tend to discolor very quickly.

Coat the brinjals with the masala only when you are ready to pan-fry them.

In this recipe, I have used coriander, green chillies, ginger, garlic and spice powders to make the masala. You can make a simpler version with just the spice powders.

Avoid adding garlic to make a no onion no garlic version.

Serve it with Varan Bhaat (dal rice) or Khichdi for a comforting meal.

You can also serve it as a side dish with your everyday meals or just enjoy it as a snack.

I would suggest you serve it right out of the pan – hot and crisp. They tend to get soft if kept for longer.

Leftovers can be stored in an air-tight container for about 2-3 days.

Reheat in a flat pan or griddle until crisp. 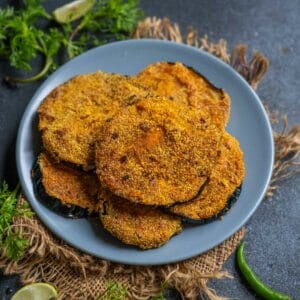 For The Masala Paste

To make it gluten-free, avoid using sooji and make it only with rice flour.